The earliest information about what is now known as the Huerto del Cura (Priest’s Orchard) dates back to 1846 when the owner, Mr. Fenoll de Bonet, sold it to Sir Juan Espuche. At this time the tenant was Andrés Castaño Peral. Some years later, Andrés Castaño bought the orchard and, as the owner, he lived there with his family until his death. The orchard was nothing more than a plot of farming land exclusively dedicated to agriculture. After the death of Andres Castaño, the third of his sons, José, who was a priest, continued living in the family home and, shortly before 1900, he became the owner then known as “Huerto del Capellán Castaño (Chaplain Castaño’s Orchard).” Some years later his name was shortened to “Huerto del Cura (Priest’s Orchard),” which is still used today. 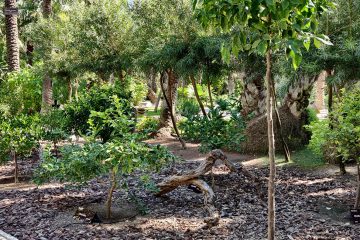 The new assortment is now made up of 14 different citrus species, all of which have been The National Artistic Garden Huerto del Cura has always had a collection of citrus trees.Since its beginnings, lemon Read more…